MH370 - Malaysia will never give up 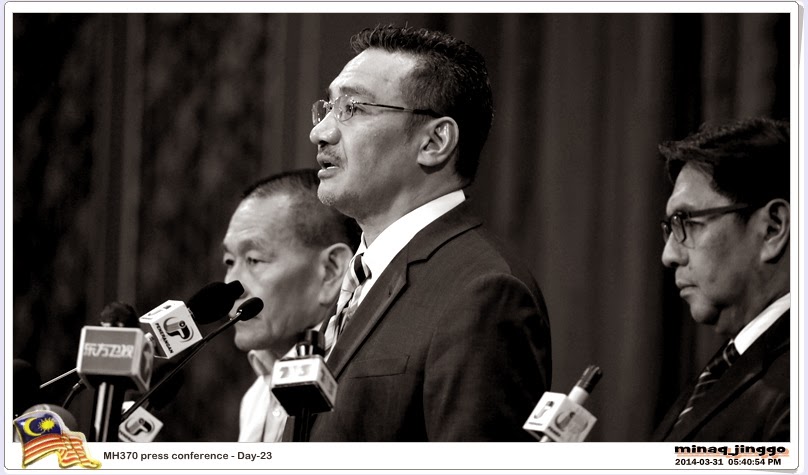 Before I begin today’s briefing, I would like to reiterate what Australian Prime Minister Tony Abbot said this morning. The international co-operation underway in the search for MH370 is nothing short of tremendous. The militaries of Malaysia, Australia, the United States, New Zealand, China, Japan and Korea are all working to find the missing plane.I should also like to point out that Indonesia has given clearance for 94 sorties - by aircraft from nine different countries -- to fly in their airspace, as part of this search.As Prime Minister Abbot said, it is heartening to see so many different countries working together for a humanitarian cause; to resolve this extraordinary mystery; and to bring closure for the families of those on board.Prime Minister’s trip to Perth 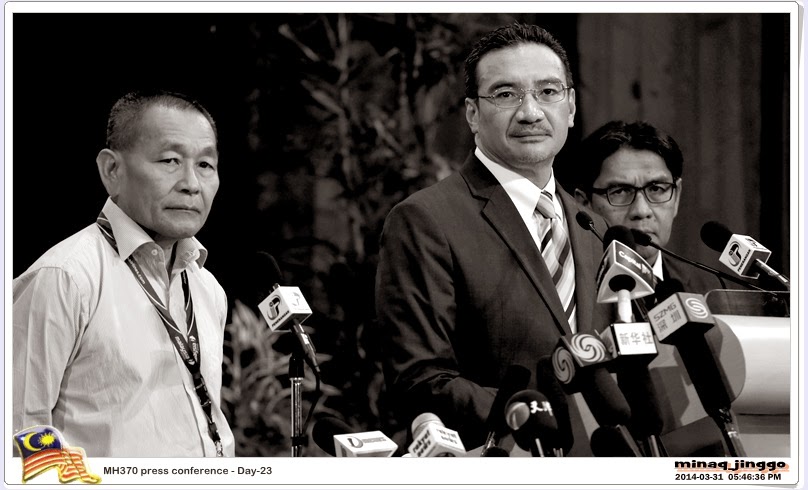 This morning, the Prime Minister spoke with Australian Prime Minister Tony Abbot. Prime Minister Abbot gave a full update on the status of the search operations, headed out of Perth.Our Prime Minister has decided to travel to Perth on Wednesday for a working visit to Pearce Air force base, to see the operations first hand and also to thank the personnel involved in the multinational search effort, including the Malaysian personnel. Operational update 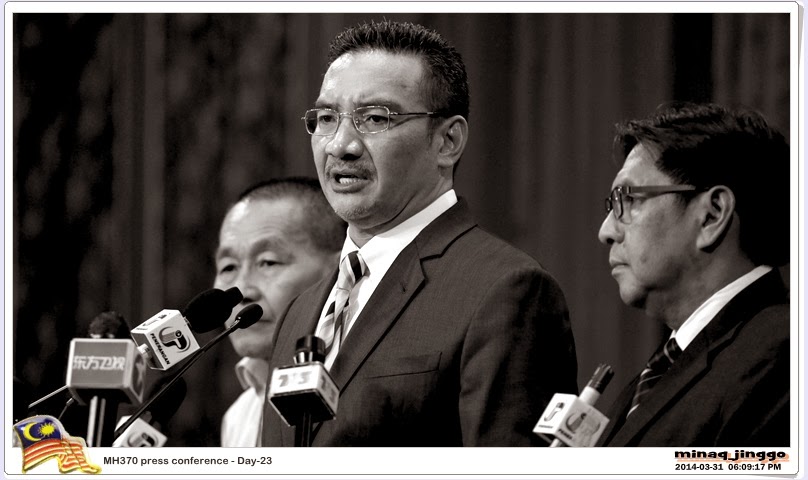 This afternoon, the Australian High Commissioner to Malaysia briefed me on the creation of a new, Joint Agency Co-ordination Centre (JACC), which will be based out of Pearce Air force base in Perth.The JACC will be headed by Air Chief Marshal (ret.) Angus Houston, the former Chief of the Defense Force Australia. The JACC will co-ordinate operations between all Australian government agencies and international search teams.As per the information that we have received from the Australian authorities, the area of search today is 254,000 square kilometres. Today, nine military aircraft and one civilian aircraft travelled to the search area. These planes were:•        two Malaysian C-130.•        one Chinese Ilyushin IL-76. •        one Japanese Coast Guard G5.•        one Australian P3 Orion.•        one New Zealand P3 Orion.•        one New Zealand civilian aircraft.•        one American P8 Poseidon.•        one Japanese P3 Orion.•        one Korean P3 Orion.Today eleven ships were also deployed to the search area:•        Eight Chinese ships: - the Xue Long,- the Kunlunshan,- the Haikou,- the Qiandaohu Jian,- the Jing Gang Shan,- the Haixun,- the Dong Hai Jian,- and the Nan Hai Jian.•        Three Australian ships: - the HMAS Success,- the HMAS Toowoomba- and MV Barkley Pearl, which is currently transiting  in the search area.The Malaysian ship, the KD Lekiu, is expected to arrive in the search area on 3 April.The ADV Ocean Shield - fitted with the towed pinger locator and a Bluefin 21 autonomous underwater vehicle - is due to arrive in the search area on 3 April. In terms of the sightings of potential objects:On Saturday, five objects were retrieved by HMAS Success and the Haixun. However, it was found that none of these objects were related to MH370. On Sunday, an Australian P3 Orion made visual sightings of seven potential objects. A Korean P3 Orion also made visuals of three potential objects.The Chinese ship, the Haixun, was tasked on Monday to retrieve these potential objects. ASEAN Defence Ministers’ meeting 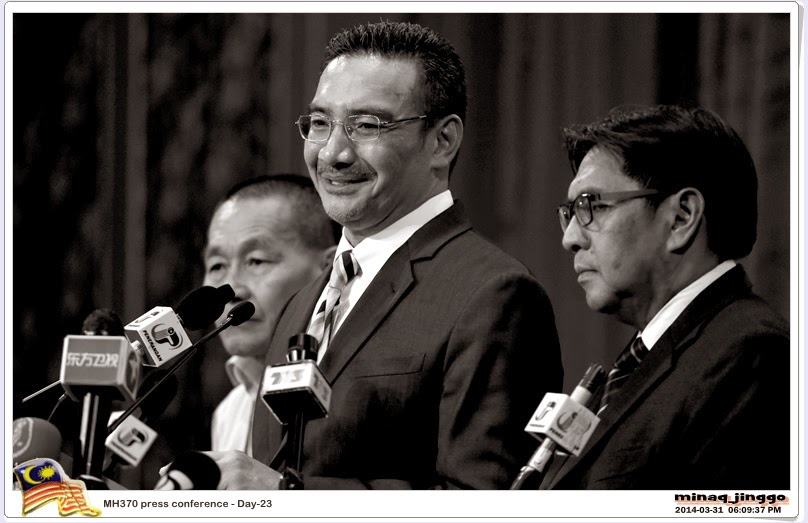 In my capacity as Malaysian Defence Minister, I will leave tonight for the United States Pacific Command in Hawaii. I will attend the ASEAN Defence Ministers’ meeting, which will be held from 1st to the 3rd of April. The meeting is being convened by US Defense Secretary Chuck Hagel.On behalf of the Malaysian Government, I will share with my ASEAN counterparts, and the Government of the United States, the latest developments regarding the search for MH370. I will convey to our ASEAN neighbours and the United States, Malaysia’s utmost appreciation for their invaluable help in the multi-national search effort.I will also use this opportunity to discuss the possibility of deploying more specific military assets, in the event that we need to embark on a more complex phase of the operation.  I shall be discussing with the United States, and our other friends and allies, how best we can acquire the assets needed for possible deep sea search and recovery.Meeting with the Indonesian Special Envoy 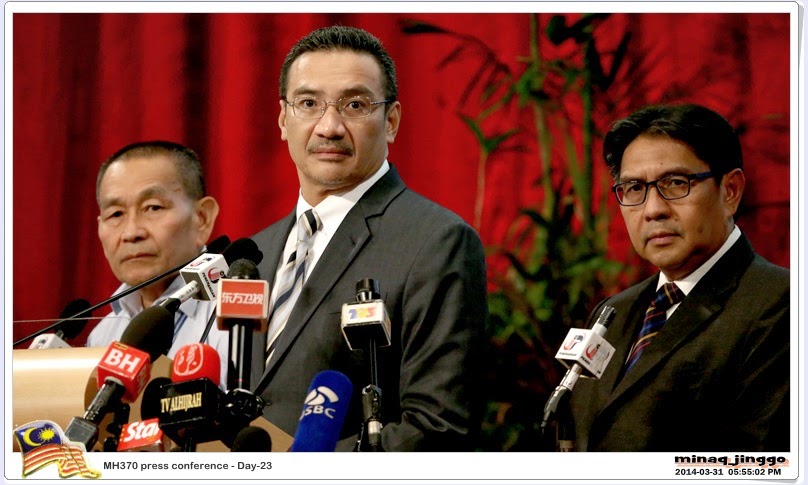 Today, I held a meeting with the Indonesian Special Envoy and Special Advisor to the Foreign Minister, Madam Wiwiek Setyawati Firman, and her delegation. The delegation included H.E. Mr. Herman Prayitno, the Ambassador of Indonesia to Malaysia.The Special Envoy expressed her heartfelt gratitude to the Government of Malaysia and the multinational team conducting the search operation. The Special Envoy also stated that Indonesia fully understands the complexity and the magnitude of the challenge ahead, and reaffirms its unshakeable support for Malaysia.Next of Kin 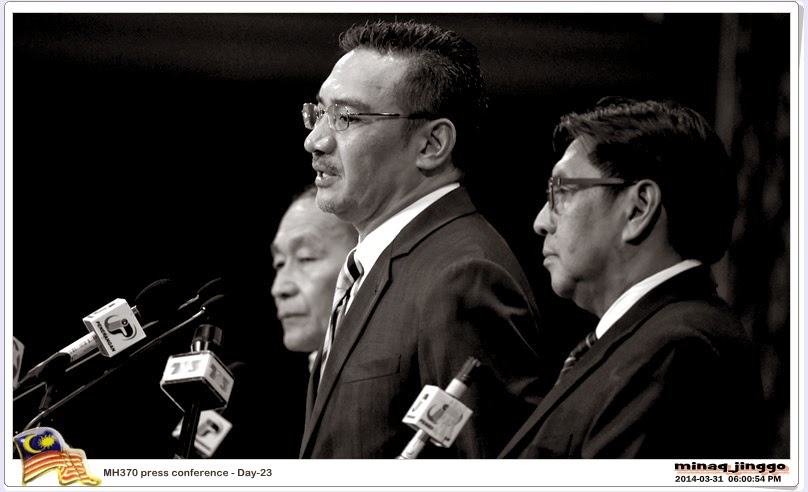 Yesterday a group of families, whose loved ones were on board MH370, arrived in Kuala Lumpur from Beijing. The Government is due to hold a high-level briefing soon for these families, to update them on the latest developments regarding the search for MH370. The briefing will include international experts who were not available during the briefings in Beijing, including experts from China. It will also be broadcasted live to other families in Beijing. The search for MH370 continues to be a large, complex, multinational effort involving many countries and international agencies. Much of the research that has been used to track MH370 has been provided to the Malaysian investigators by our international partners. This research is extremely complicated, involving teams of highly specialised experts, many of whom are based in different countries around the world. The briefing will provide an opportunity for the families to hear directly from some of these experts. The experts will be able to explain the research, the data and the methodology that has informed the search operation.Concluding remarks 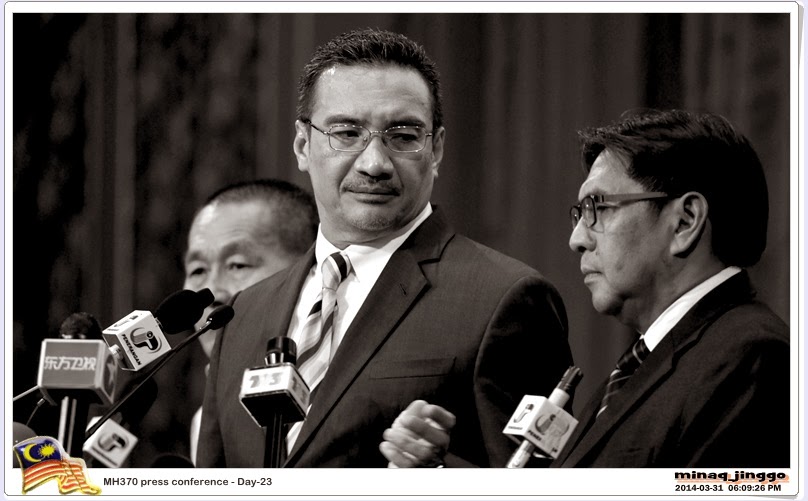 We understand that it has been a difficult time for all the families.  And we appreciate that many families want to see physical evidence before they will accept that MH370 ended in the southern Indian Ocean.We find ourselves in a difficult position. I repeat: the question that the families principally want answered, is the question we simply do not have the answer to - namely, where their loved ones are, and where is MH370.On Saturday I met with the Malaysian and Chinese families based in Kuala Lumpur. It was the most difficult meeting I’ve ever attended. The families are heartbroken. For many, the strain of the past few weeks has been unbearable. But the one message they delivered to me again and again is not to give up hope. And I promised the families that Malaysia, working with our international partners, will not give up hope.We will continue with all our efforts to find MH370.This is a promise that Malaysia intends to keep. We will continue searching, and we will keep investigating, and we will never give up until we find out what happened to MH370.
Posted by minaq jinggo at 4/01/2014 10:30:00 am