MH370: Full statement by Hishammuddin Hussein, March 26, 5.30pm
Introductory statement
The search for MH370 continues. Our efforts are now focused in the southern Indian Ocean, where a multi-national team, led by Australia, is combing the waters trying to find debris from the flight.
Our determination to find MH370 remains steadfast. As we have said all along, we will never give up trying to find the plane – in order to bring closure for the families, and to establish exactly what happened to MH370.
New satellite images
Australia, China and France have already released satellite images, showing objects that may be related to MH370.
Yesterday, on 25 March, the Malaysian Remote Sensing Agency (MRSA) received new satellite images from Airbus Defence and Space, which is based in France. The images were taken on 23 March.
MRSA analysed the images and - in one area of the ocean measuring some 400 square kilometres - were able to identify 122 potential objects.
Some objects were a metre in length; others were as much as 23 metres in length. Some of the objects appeared to be bright, possibly indicating solid materials.
The objects were located approximately 2,557 kilometres from Perth.
We will issue handouts relating to this new information, after this press conference.
MRSA’s findings were immediately forwarded to the Australian Rescue Co-ordination Centre in Perth yesterday.
It must be emphasized that we cannot tell whether the potential objects are from MH370. Nevertheless, this is another new lead that will help direct the search operation.
We have now had four separate satellite leads, from Australia, China and France, showing possible debris. It is now imperative that we link the debris to MH370. This will enable us to further reduce the search area, and locate more debris from the plane.
Operational update
Australia is leading the search effort in the southern Indian Ocean, based out of Perth. Malaysia continues to play a co-ordinating role. All countries involved are displaying unprecedented levels of co-operation; that has not changed.
Australia has divided the search area into two sectors, East and West.
Today the weather has improved, and twelve planes will travel to the search area – six in the East sector and six in the West.
In the East sector, searches will be conducted by:
·         one Australian P3 Orion, and three Australian civilian aircraft.
·         one Chinese Ilyushin IL-76.
·         one New Zealand P3 Orion.
In the West sector, searches will be conducted by:
·         one US P8 Poseidon.
·         one Korean P3 Orion.
·         one Japanese P3 Orion.
·         two Australian P3 Orions, and one civilian aircraft.
Two ships will also join the search operations.
Yesterday ‘HMAS Success’ was redeployed to the south of the search area due to bad weather.  Today the ship has returned and will support the search operation in the West sector.
Meanwhile, the Chinese ship ‘Xue Long’ has today been deployed to the East sector.
A Japanese Coast Guard gulfstream aircraft left Subang this morning for Perth, to join the search operation.
As I mentioned yesterday, the search operations in the northern corridor, and in the northern part of the southern corridor, have been called off. The Ministry of Foreign Affairs has sent diplomatic notes to all relevant countries to formally inform them of this change.
Before I continue, I would like to convey our appreciation to the Australian authorities, and in particular to Prime Minister Tony Abbot, for making such an extraordinary contribution to the search operation.
Chinese Special Envoy
Today, the Prime Minister met with His Excellency Zhang Yesui, the Chinese Vice Minister of Foreign Affairs and Special Envoy of the Government of China.  I also met with His Excellency this afternoon.
During our conversation His Excellency conveyed China’s commitment to continue and intensify the search operation in any way possible, and to deploy any assets that may be required.
Malaysia has provided his His Excellency and his delegation with a full update on the latest information from Inmarsat.
His Excellency and his delegation also received a comprehensive briefing from the international technical team.
International Working Group
As I mentioned yesterday, based on the new information provided by Inmarsat, we have established an international working group. The agencies involved in this working group include: Inmarsat, AAIB, the Chinese CAAC and AAID, NTSB, FAA, Boeing and Rolls Royce, as well as the relevant Malaysian authorities.
The role of the working group is to help try and refine the Inmarsat data and, if possible, more accurately determine the final position of MH370.
Further information
I should like to note that the CEO of Malindo Airlines, Chandran Rama Murthy, has joined me on stage today, and will be able to answer any questions that you might have.
As I announced yesterday, MAS is now taking a lead in communicating with the families and is conducting their own press conferences. MAS will hold another press conference tomorrow.
Concluding remarks
New satellite images continue to provide clues in the search for MH370. And with improved weather conditions, aircraft are now able to investigate objects of interest.
I would like to thank once again our international partners for their continued support and assistance. The search for MH370, and the investigation into what happened on board the flight, is now a truly international effort. 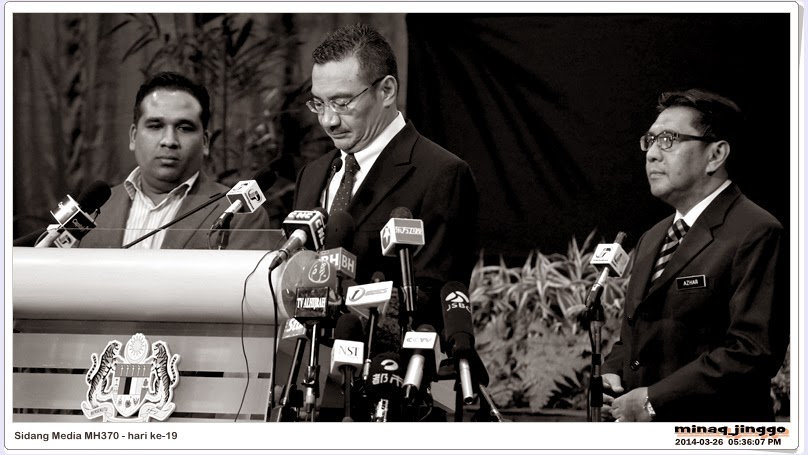 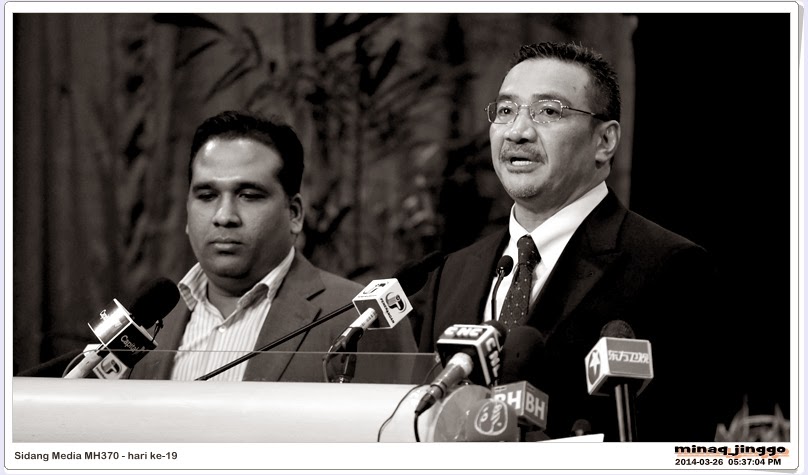 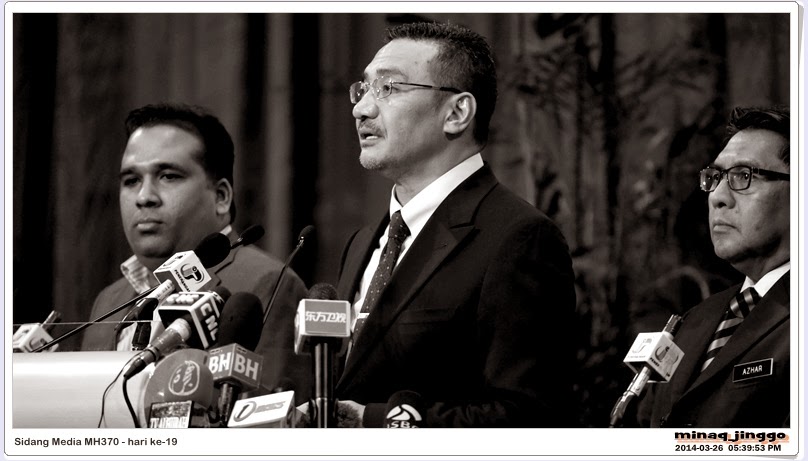 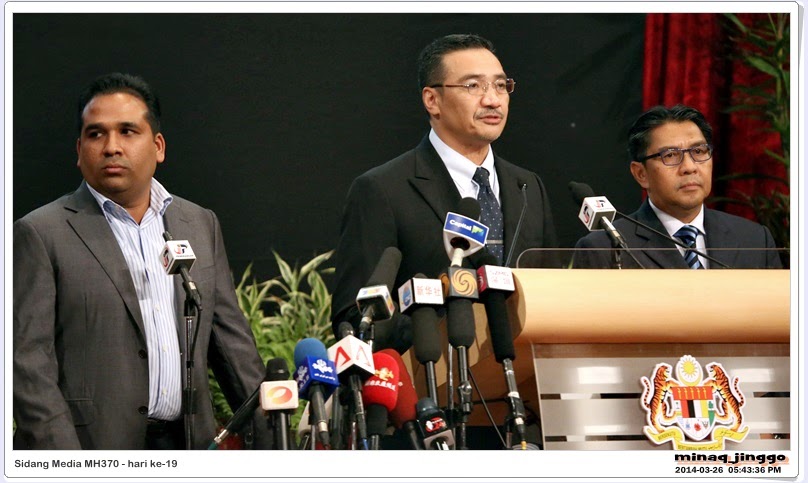 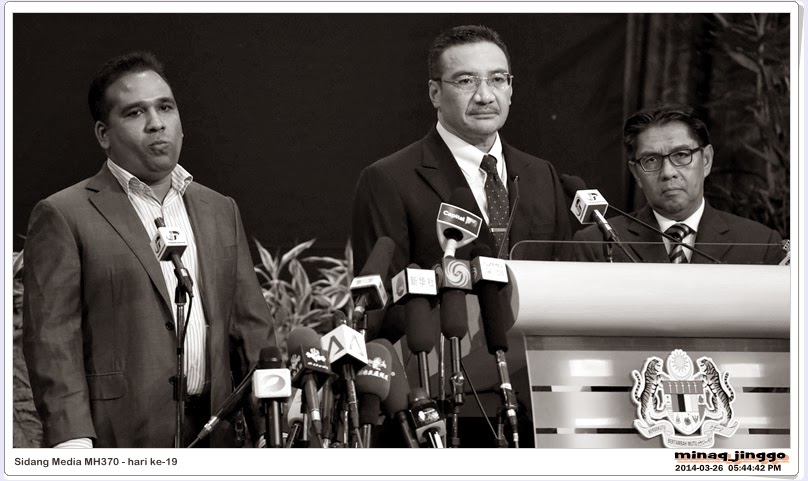 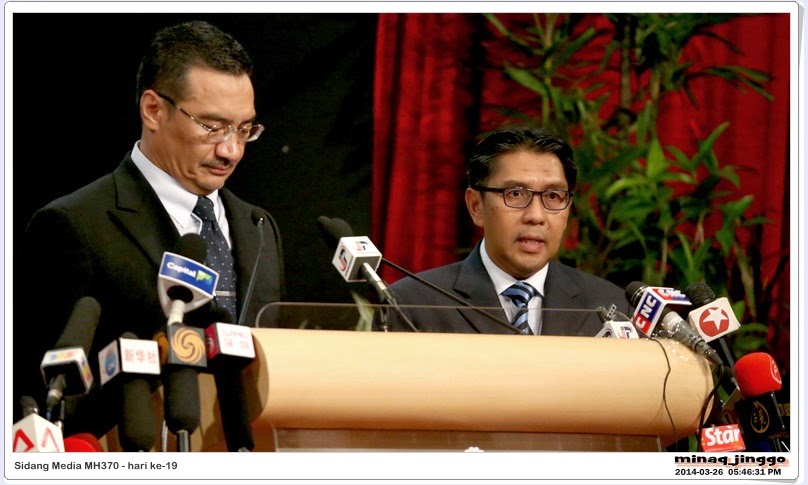 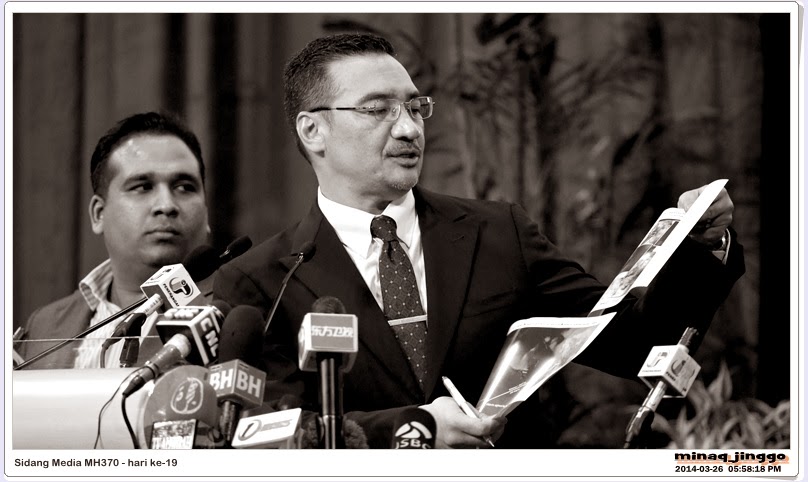 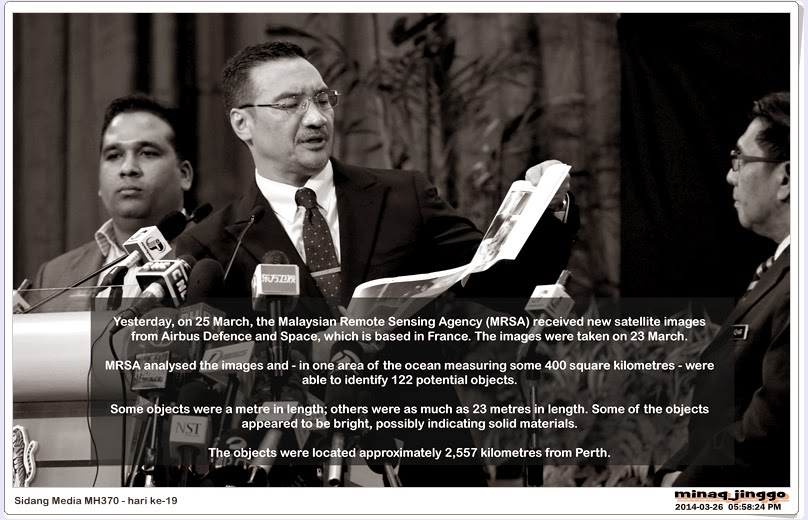 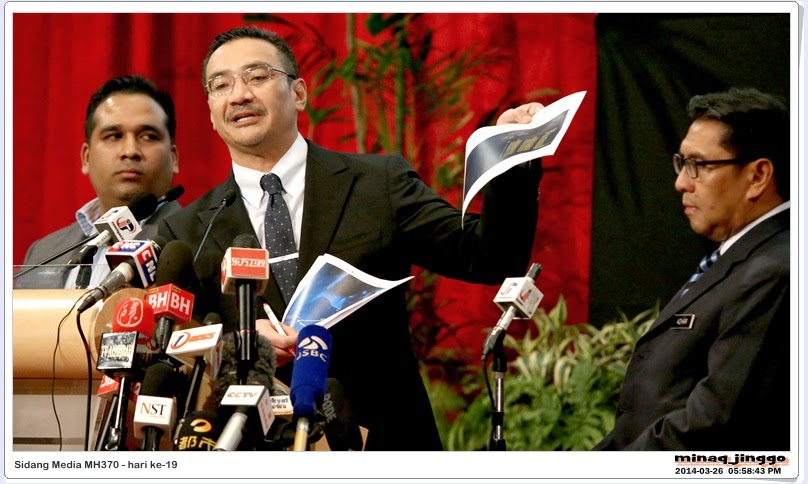 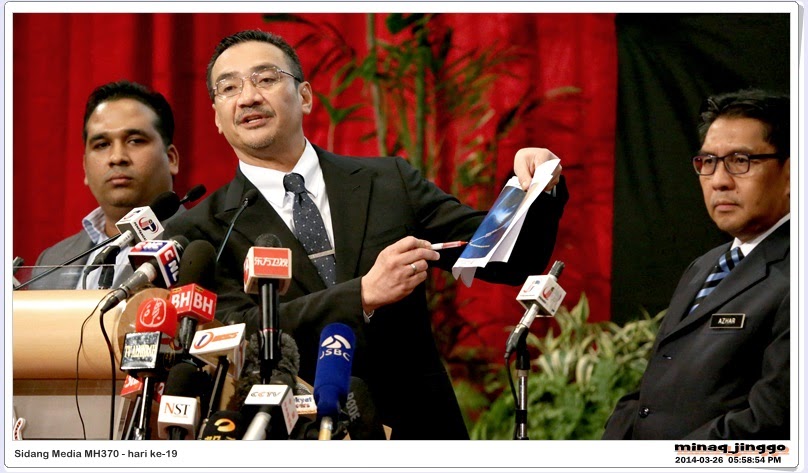 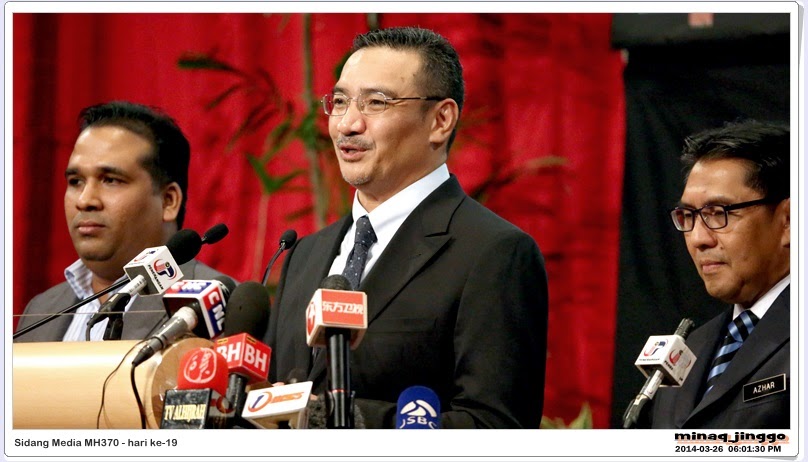 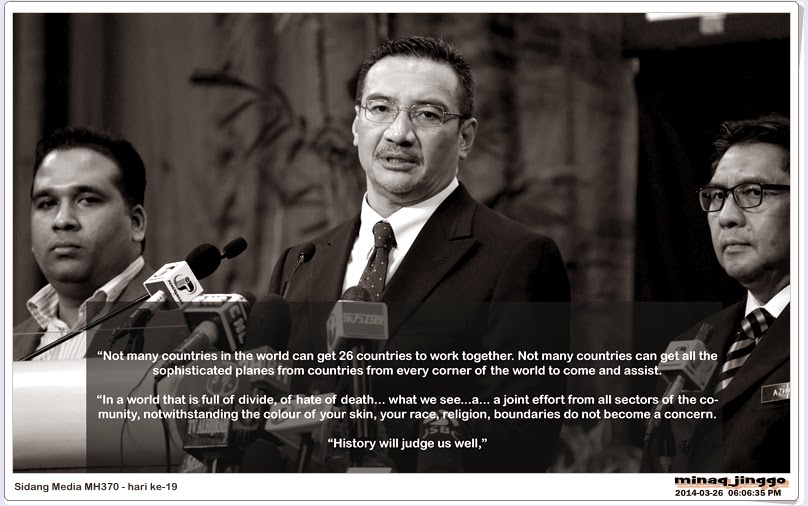 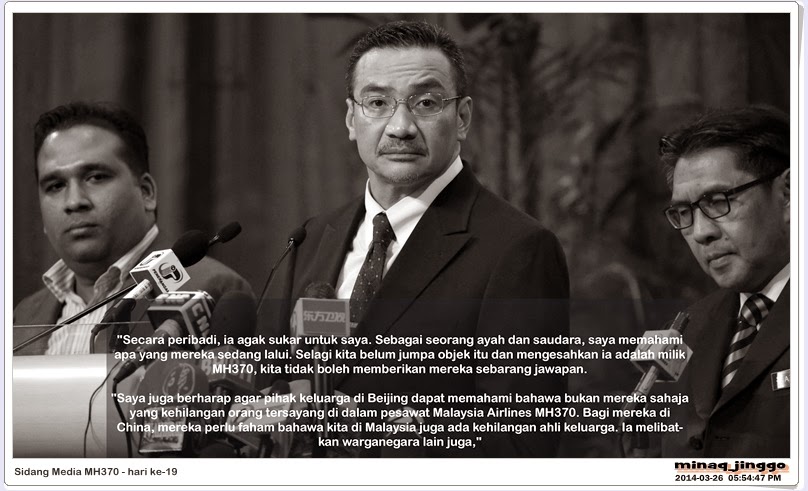